SPEECH BY DIMITRIS KOUTSOUMBAS, GS OF THE CC OF THE KKE, AT THE RALLY OF THE 31st ANTI-IMPERIALIST CAMP OF KNE – VOLOS, SATURDAY 9 JULY 2022 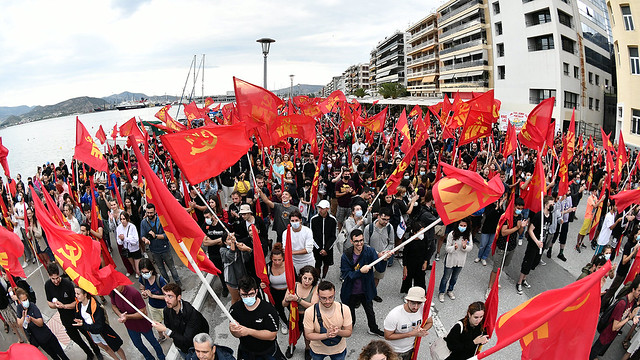 Dimitris Koutsoumbas in his speech said:

From here, the working-class city of Volos, the city where the “Communist Manifesto” was printed for the first time in Greek in 1908 in the newspaper “Ergatis” (Worker), the city of the three popular uprisings of the Volos proletariat in 1909, February 1921 and June 1936, but also of other great struggles of our people that followed, we are sending a strong message across Greece!

A message of struggle, counter-attack, and at the same time a message of peace and internationalist solidarity with the struggling peoples.

We are sending this message together with our comrades from the Communist Parties from Turkey, Spain, and Mexico, who are here with us today.

We welcome them to this red sea of young people who have flooded the beach of Volos.

The recent decisions of the NATO Summit in Madrid, to which the government of New Democracy (ND) has put its signature, backed by the opposition of SYRIZA - PASOK, further add fuel to the fire of the imperialist war in Ukraine.

They are opening a “Pandora’s box” for new imperialist interventions and wars against other peoples in many regions of the world.

For example, in the Pacific region, where a major confrontation is taking place between the Euro-Atlantic forces and the rising power of capitalism, China.

The peoples are already paying dearly for their policies. Sometimes with their blood and sometimes with the unbearable high prices. They are paying for their new wars over raw materials, energy, mineral wealth, commodity transport routes, market shares, and the redivision of the world.

The fierce competition between the world’s greatest powers, the economic giants, the bourgeois classes and the imperialist powers is still going on. Every day that passes, it gives rise to war and bloodshed, unemployment, high prices, and the impoverishment of the people.

And tonight from here, Volos, we demand an end to be put to the transformation of our country into a hornet’s nest of the US-NATO criminal plans!

We demand that the US bases located in Thessaly, in nearby Stefanovikio in Volos, in Larissa but also in other regions of our country such as Alexandroupolis, Crete, Araxos, and elsewhere should immediately be closed down.

At a time when the nuclear briefcases fill the TV screens, when both NATO and the rival capitalist powers, such as Russia, are flaunting their nuclear arsenal again.

We must not allow Greece or any other country to become a shooting range.

We will not allow a holocaust of entire cities and peoples for the capitalists to measure their power, as in the case of Hiroshima and Nagasaki.

Now is the time for every patriot, every internationalist, every conscious worker, and every young person dreaming of their future to take action.

Now is the time that we all demand the disengagement of our country from the imperialist war!

That the bases of death be closed down!

That the Greek military forces outside the borders, such as the ones in Saudi Arabia, the Balkan countries, and elsewhere return home.

No to the excessive military spending for NATO’s needs.

The peoples have the power!

The youth can and must be at the forefront to overturn the negative correlation of forces.

The wheel of history turns with the class struggle!

This is demonstrated today by the courier workers, the construction workers, the dockers, the doctors and nurses in the hospitals, and the delegates of hundreds of trade unions who participated in the Congress of PAME (All-Workers Militant Front) and discussed and organized their new struggles.

It is also demonstrated by the recent, great victory of “Panspoudastiki”, of KNE, in the  university students’ elections, which took first place for the first time after 36 years!

Through the struggle, the youth and the people can change the negative correlation of forces, prevent worse measures to come, and find some relief.

But also to shape the preconditions to send this unjust, decayed, and barbaric system of wars and exploitation to its rightful place once and for all: to the dustbin of history!

We must turn our backs not only on ND but also on those, such as SYRIZA and PASOK, who claim that our lives will be improved with an anti-people’s government of a different hue.

They deceive the people when they say or imply that they will supposedly reduce poverty, unemployment, and high prices; that these supposedly are policies only of the neoliberal model of ND and not of their own social democratic management.

They want to make the people forget what they did when in government as they proved to be more neoliberal than the neoliberals themselves!

If they really wanted to relieve the people from poverty, they would have all supported the proposals of the KKE:

- For the immediate and full reopening of lignite plants;

- For the abolition of energy and pollution exchanges;

- For the lift of sanctions against Russia;

And so much more, such as proposals for laws and amendments that we have submitted to the Parliament.

However, they are not concerned about providing true relief to the people but about getting their vote once again in the elections that are coming up soon, as everything suggests that they will take place in September.

They are concerned about the continuation of the same anti-labour course, with the close collaboration of right-wing, left-wing, and centre-left mouthpieces, with whatever scenario emerges from what they cook up.

They must understand once and for all that the KKE will not show indulgence in the old and new crimes planned against the people!

We will continue our struggle for the information and organization of the people, who are the only ones who can corner them today and open the way to chart another course for the country, with the people at the forefront of the developments.

Every time that the communists put forward their political proposal, when they warn the people and call a spade a spade, the various bourgeois staffs play the intimidation card such as the Turkish danger.

However, reality shows that now that power is in their hands, in the hands of the robbers - capitalists, the danger of war is growing stronger and stronger for the peoples.

The NATO Summit in Madrid and its decisions have exacerbated these dangers with the clash between the two international camps that are being formed: the Euro-Atlantic camp led by the USA–the EU and the Euro-Asian camp led by Russia–China.

Trillions of dollars in military armaments, interventions across the globe, 300,000 NATO battle-ready troops for missions abroad, and so much more are already on the agenda.

Greece and Turkey have been NATO members since 1952 but this provides no security.

Year after year, the threats to the peoples of both countries grow stronger and stronger.

Threats that also arise from NATO, which does not recognize borders in the Aegean.

Threats that manifest themselves through the competition of the bourgeois classes over geopolitical pillars, market shares, and energy wealth.

Today that we are EU and NATO members and within the framework of capitalism, the peoples and the youth are being turned into cannon fodders; the workers in the two neighbouring countries, Greece and Turkey, are being put in danger, both by the sharpening of military conflicts and military adventurism and by the looting of natural resources and the destruction of the environment caused by the monopolies due to the notorious “co-exploitation” of the Aegean. This situation is not a one-way street for the peoples!

The peoples of Greece and Turkey can shape a peaceful future of cooperation and friendship, of equal and mutually beneficial relations; without foreign “protectors” and “arbitrators”; without NATO, the EU, or any imperialist alliance; with respect for the borders and the international treaties that define them; without heated incidents and military confrontations!

We are walking together on this path of peace and joint struggle of the peoples against NATO, capitalism, and all those that undermine the future of the youth and the peoples!

That is the path of proletarian internationalism, social overthrow, and the true emancipation of the peoples!

It is the path of the new society, socialism–communism!

We wish strength to all of you!”