MASS RALLIES OF THE KKE ACROSS THE COUNTRY

THE ANTI-LABOUR DRAFT BILL MUST BE REPEALED We will not become slaves in the 21st century! Exploitation cannot be “regulated”, it must be abolished! This was the message of unrelenting struggle conveyed by the mass rally of the KKE in Athens against the anti-labour draft bill that the ND government will introduce to Parliament. The GS of the CC of the Party, Dimitris Koutsoumbas, addressed a speech at the rally in Syntagma square.

Corresponding rallies of the KKE were held in Thessaloniki and other cities in Greece. D. Koutsoumbas referred in detail to the anti-labour draft bill, stressing that “it continues and deepens the attack that has been launched by previous laws in the past 10 years against workers’ achievements” and added that “the communists, the members of the KNE, and all the people standing by our side work day and night to inform the workers and reveal the governments’ lies. We are at the forefront in all workplaces, trade unions, and mass organizations of the labour–people’s movement to organize the struggle and prepare the upcoming strike that will be a militant response to the monstrous anti-labour bill.”

“ND is able to introduce this monstrous draft bill exactly because the PASOK and SYRIZA laws have preceded. All of them, step by step, implemented the claims of the capital. They all have armed the big employers and the financial sharks with new weapons. All of them in turn introduced measures aligned with the core of the EU strategy and the so-called “best European practices”, which in fact mean ever-worsening working conditions. They all bear responsibility for the intensification of exploitation, by continuing each other's legislative work”.

Making a historical review of the struggles for the 8-hour working day, the GS of the CC of the KKE noted: “The 8-hour working day and the stable working time were always a cause for confrontation between workers and business groups, because they are at the very heart of the rights of the working class. 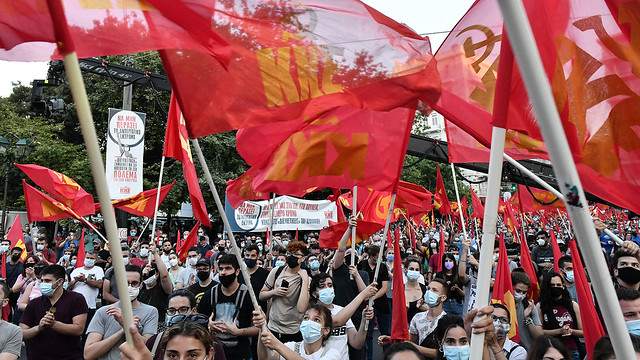 Thus, today, the ND government seeks to intervene in the working time. Its regulation, particularly in terms of individual negotiation, is deeply reactionary and leads to the intensification of exploitation (...) Today, in the era of the 4th industrial revolution, working time is being increased instead of being reduced. They are trying to call this progress. This is progress for the system of exploitation.

However, what is considered to be progressive for capitalism, is a setback for the working class and the people (…) Imagine the increase of labour productivity and the relevant surplus value due to the introduction of new technologies into production. Imagine how much has intensification skyrocketed; how much absolute exploitation, that is, the unpaid work with the increase in daily working time beyond 8 hours, has increased!

The GS of the CC of the KKE also stated: “Modernization does not mean the adjustment of working relations to the ever-changing needs of voracious capital, as the government is trying to promote. Modernization means the general reduction of working time, stable work for all, the abolition of every form of flexibility, wages and rights based on the contemporary needs. Modernization does not mean individual contracts, i.e. the individual negotiation between enterprises and workers”. He also referred to the provisions of the draft bill that “take a further step into attacking trade union action and the right to strike (…), being unable to conceal the hatred of employers and governments against organized–collective claiming of demands. The are overtly striking a blow to the constitutional right to strike.

We respond: This is not Japan, where workers are supposedly on strike but continue working, wearing a white armband. This is Greece. We have a long history of workers’ struggles, a class-oriented labour movement, PAME, the Communist Party of Greece!”.

Referring to the 21st Congress of the Party, whose preparations are in hand, he stated that
“We are optimistic that we can make it, that we can strengthen our Party; because a strong KKE can truly become the mind, heart, and organizer of the workers’–peoples’ struggle for socialism”. He also called upon the people “to militantly joint forces with the KKE, in the daily struggles, in the labour–people's movement, in all the political battles”.

D. Koutsoumbas concluded that “We will not become slaves in the 21st century! The monstrous anti-labour draft bill must be repealed. Its initiators, together with the governments that led us to this point, must be politically punished! All the PASOK–SYRIZA–ND anti-labour laws must be abolished! Everybody must join the struggle for the success of the nationwide general strike!”.