21st Congress of the KKE

The work of the Congress is continuing On 25/6, the work of the Congress proceeded with the report of the outgoing CC to the 21st Congress presented by its GS, Dimitris Koutsoumbas. The work was held in the Conference Hall of the Headquarters of the CC of the KKE.

The Congress will be completed on Sunday 27 June with the election of the new CC and the new Central Audit Committee.

The topics of the Congress, based on the Party Statutes, are the following:

a) The report of work of the Central Committee and the Party as a whole from the 20th towards the 21st Congress, the basic assessments on the international and domestic economic and political developments of that period, the condition of the labour–people’s movement and the Party’s tasks up until the 22nd Congress.

b) The election of a new Central Committee and Central Audit Committee.

The Report of the CC of the KKE noted that the overwhelming majority of Party members voted in favour of the Theses of the KKE during the pre-congress procedures.

It also referred to the Party's goals for the next period and provided information about the social and age composition of the Party.

The age composition of the Party

In the meanwhile, 101 Communist and Workers' Parties across the world have sent Messages of Greetings to the 21st Congress of the KKE, expressing their wishes for the success of its work.

The original messages can be found here https://21stcongresskke.blogspot.com/2021/06/list-of-messages-of-greetings-to-21st.html#more, while the messages translated in Greek are published in the news portal of the KKE – 902.gr in the address www.902.gr/node/261661. 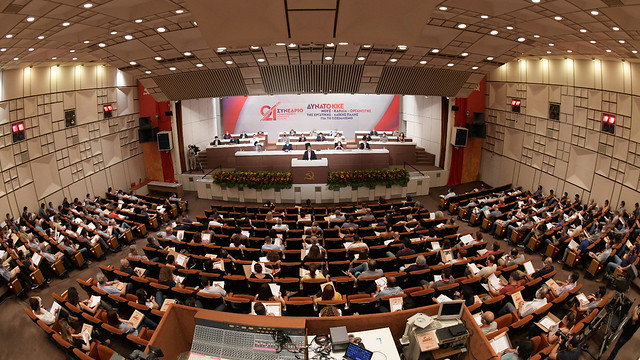