Under the slogan “No the the intervention in Syria. USA-NATO-EU are making the peoples bleed. The government supports this crime” thousands of demonstrators in Athens and the rest of the cities of the country took to the streets and participated in the demonstrations organized by the Communist Party of Greece (KKE) and the Communist Youth of Greece (KNE), on Friday, April 13th. The massive demonstration in Athens ended in front of the US Embassy demanding the ousting of NATO bases from our country, no participation of Greece in any way to the interventions.

The SG of the CC of the KKE, Dimitris Koutsoumpas, participated in the demonstration and made the following comment: “Unfortunately the dangers for a generalized imperialist war are increasing. The Greek government is shouldering great responsibilities against our peoples interests. It must be immediately disentangled from the imperialist US-NATO plans in the region, from the use of their military bases on Greek soil, that apart from other issues can also become the targets of possible attacks.” 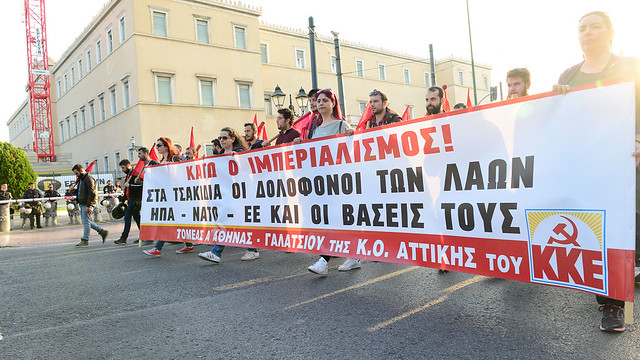