A mass protest against repression, police violence and anti-popular policy, which go hand in hand, took place on 9/3 in Nea Smyrni (a municipality southeast of Athens), following a call by the trade union of construction workers of Athens, trade unions, workers’ associations and other mass organizations. The trigger was another case of police violence that took place last Sunday in Nea Smyrni square, with police officers brutally beating a young man who reacted to the intimidation of families by police forces that were arbitrarily imposing fines for "unnecessary movement" in the framework of the restrictions imposed to control the spread of the pandemic.

The protesters throughout the mass rally and march shouted out loud “Intimidation will not pass, the workers’ struggle will break it”. The protesters of the trade union and federation of construction workers carried a banner reading “Give money for health and education. No to repression and intimidation”.

Police forces took advantage of the provocative action of a group that was separated from the main rally in order to disperse the crowd; however they did not succeed. During the events between police forces and hooded men a police officer got injured. 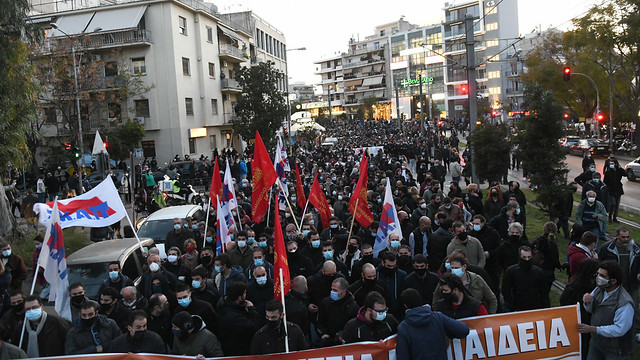 In a statement, the Press Office of the CC of the KKE stressed the following: “The mass rally of trade unions, workers’ associations, mass organizations and thousands of residents that took place in Nea Smyrni against unprovoked police violence cannot be marred by the events set up by the government and other suspicious mechanisms, with the help of some provocateurs that aimed at the mass mobilization of the people of Athens.  The unacceptable injuring of a police officer and the events that took place in Nea Smyrni cannot in any circumstances whitewash the ND government and the responsibilities it bears for the police state climate that continues to impose”.