Dynamic protest outside the Polish Embassy against anti-communist persecution A protest rally with the slogan “Hands Off the Polish Communists. Hands off the Communist – Anti-Fascist Monuments. All anti-communist persecution to cease immediately.” was organized by the KKE and the KNE on Monday morning, December 3rd, outside the Polish Embassy in Athens.

Shouting slogans such as “Solidarity with the struggles of the peoples, no to the persecution of communists” and “Not even in Poland do your threats intimidate us. Hands off the Communists”, the protesters condemned the escalation of the anti-communist attack by the government of Poland which is pushing for changes in the Polish penal code in order to ban communist symbols using the inexcusable equating of these with “fascist symbols”.

At the same time, they expressed their solidarity with the members and cadre of the CP Poland that will be on trial once again on December 7th, with the indefensible and baseless charges of “public promotion of a totalitarian system” through the “Brzask” newspaper and the website www.kompol.org.

The MEP of the KKE and member of the CC of the party Kostas Papadakis met with the Secretary of Political Affairs of the embassy to whom he presented a relevant document.   The embassy representative, for his part, invoked the anti-communist Constitution of the country that provocatively equates Communism with Fascism.

K. Papadakis stressed in his statement  that: “We want to condemn all anti-communist persecution that is under full swing during this period in Poland. The government of Poland, its judicial authorities, are promoting trials against communists, the Editorial Board of their journal, trials with charges that mean up to two years of imprisonment, under the pretext of their promoting totalitarian regimes. 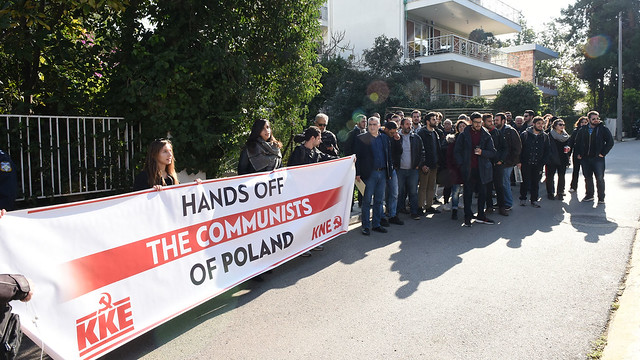 It is an inexcusable, provocative and ahistorical theory which equates communism with the monster of fascism. Similar forms of persecution are underway against scientists at the University of Szczecin where they are being persecuted because they organized a seminar for the 200th anniversary of Marx's birth, as well as prosecutions against protesters who, for example, were wearing May Day t-shirts with Lenin on it. These persecutions are reprehensible; they represent a specific stance, an anti-communist stance of the government that is being encouraged by the EU. We especially want to condemn the EU's stance which during all this period encourages, strengthens and justifies the anti-communist persecutions. It is indicative that in a recent reply to the Question put forward by the Euro-parliamentary Group of the KKE, the Commissioner (of the EU) mentioned that there are state-members that approach their history in that way, that is, with anti-communism.

At the same time, we asked the embassy spokesman about recent actions in Poland where the Dziwnow  monument, the monument to the dead militants of the Democratic Army of Greece, was altered. It is an unacceptable move that has already provoked the rage and indignation of the thousands of Greek political refugees and their descendants who live and work in Poland. As the representative of the embassy said (referring to the alterations), there was a "correction" after decades to the monument, and the placard was removed that cites the list of the dead DSE soldiers. It is an insult to the dead of the struggle, it is an insult to the political refugees and represents a counterfeiting of the struggles of the struggle of an entire people and the period of the Civil War, but even more slandering of contemporary communists, their stance and their actions to reveal the rottenness of this barbarous exploitative system.

Because this is their basic aim: They are striking out against communists because they present a political proposition that can overthrow this barbarous exploitative system and build socialism which is the only way out and prospect.

We demand here and now that all anti-communist persecution cease; for there to be no persecution of any communist, that no other types of measures such as banning of symbols or destruction of monument be taken such as those being promoted by the government of Poland. We warn them that this is not the only move that we will make. We will continue to resolutely express our solidarity with the Polish communists, at the side of political refugees that will fight until the end for their history and the memory of their ancestors because the organizing of the struggle does not end. We will continue on until the final vindication.”

The demonstration in Athens took place in solidarity with the CP Poland after the call issued by the European Communist Initiative. Similar interventions took place in a series of European countries.