The disgraceful Greece-US Strategic Agreement was debated in the Greek Parliament Plenary session on Thursday 30/01/20, an agreement which expands and enlarges the US military bases in the country so it can be used as a multi-level military base for American – NATO assassins, at the same time transforming the country into a target for intra-imperialist competitions.

KKE parliament members denounced the agreement, pointing out that it is a crucial link for Greece's deeper involvement in imperialist wars and interventions, putting the country and people at great risk.

The KKE demanded its withdrawal, calling on the people to step up their fight against dangerous designs.

«You state with no shame: “The more bases we have, the greater the obstacles to Turkish aggression!" If this is so, how is it possible that in the last three years where the "American footprint" in Greece has indeed grown, that Turkish aggression has continually increased and escalated? Don't you know that NATO doesn't recognize borders in the Aegean? Don't you know that the US, NATO and the EU have virtually legalized the invasion and occupation of NATO’s Turkey in Cyprus for so many years? Do you see something else besides all theiraspirations for Turkey's illegal drilling in the Cypriot EEZ? You pretend you don't know: Turkish provocation and aggression is firmly backed byNATO. »

And he continued, «You still say,"The Agreement is a defensive one"... Who are you kidding? Even young children today know that the US has the most aggressive plans, to thwart the plans of its competitors, Russia, China, Iran. These plans reek of gunpowder, like that which has been used for years in Syria, Iraq, Afghanistan, Libya (...).»

«You also tell us:"The bases protect Greece." However, the other side of transforming Greece into a vast American and NATO military camp is what you hide from the Greek people. Why don't you tell them openly what Russian officials, or recently,what Iranian officials are saying: That US and NATO bases, wherever they exist, and in Greece, that is, are a target for reprisals. (...)

NATO bases do not protect. On the contrary, they make our country, the Greek people, a target. The Greek people are being both targeted and paying. With more than 4 billion euros a year coming out of our pockets for NATO's needs, you come forward with today's Agreement and you free it of any obligation to pay for landing, docking, or even base upgrades.»

On the government's argument that "we are receiving US technical know-how for the Greek Armed Forces", D. Koutsoumpas commented in his speech: «We see something else: You providing military equipment and Armed Forces personnel in Saudi Arabia with the responsibility of the government! Really, what sovereign rights of Greece are at stake in Riyadh and the deserts of Saudi Arabia?

Providing Greek frigates for patrols in the Strait of Hormuz while the participation of Greek Armed Forces personnel in Libya is being planned? And you are all doing this, those of the Euro-Atlantic arc. Since even SYRIZA is urging the government to find –as it says - the right formula for sending forces outside our borders, as long as it under the official aegis of the UN, the EU or even NATO! And all this in the name of "the left and progress", continuing to denigrate militant values and ideals. »

Huge rallies against the Agreement

In Athens, Thessaloniki, and in dozens of other Greek cities, class unions, mass organizations and the Greek Committee for International Détente and Peace (EEDYE) simultaneously organized huge rallies against the Agreement.

In Athens, the rally was held outside the House of Parliament, followed by a march on the US Embassy.

Nikos Papanastassis, a lieutenant colonel, a member of the National Council of EEDYE and MP of the KKE, spoke at the gathering, along with Giota Tavoularis, president of the Federation of Pharmaceutical Industry Workers and a member of the Executive Secretariat of PAME.

Dimitris Koutsoumpas was among the protestors, after coming out of the Parliament building, while a large delegation of the KKE Central Committee participated in the mobilization. 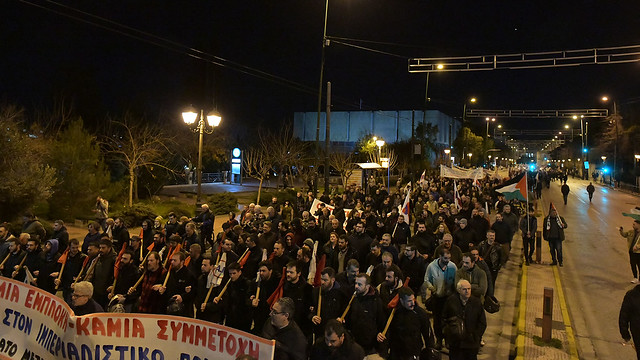 The KKE voted against

Finally, with 175 votes in favor, 33 against and 80 “abstaining”, the Greek-US Strategic Agreement was ratified by the Parliament. The KKE voted against, while the Agreement was voted for by the ruling party ND and the social-democratic PASOK/KINAL. The stance of the former social-democratic SYRIZA government was hypocritical, the party which had prepared the deal while it was in government, maintaining, multiplying, and expanding the US military bases. SYRIZA now voted "to abstain", arguing that the government should have secured a better “exchange” from the US. Members of the far-right "Hellenic Solution" Party voted against based on the same logic of "exchanges", along with the social-democratic MeRA25 with its pointless pacifist argument on humanizing imperialism. _