KKE: Dozens of events and activities against imperialist war Numerous political events of the KKE and KNE against the imperialist war in Ukraine are taking place all over Greece, from Crete to Alexandroupolis. The mass political events of the KKE are being held to illuminate the people around the character and the causes of war, which are also highlighted in the recent Resolution of the CC of the KKE, as well as to strengthen the demand for the disengagement of Greece from imperialist war, for the closure of US–NATO bases, for the return home of all the sections of Greek armed forces in missions abroad, for the disentanglement of Greece from imperialist plans and unions, with the people being masters in their own land.

At the same time, members of the KKE and KNE are holding anti-war activities outside of military camps and ports, which are a passage for imperialist troops. Such activities took place in Alexandroupolis, Xanthi, Chania, Larissa, and Piraeus. In the Piraeus port, the protesters threw red paint at a NATO ship.

On 20/03/22, the GS of the CC of the KKE delivered a speech at a mass event organized by the Section of the CC of the KKE for Armed and Security forces in Athens. “The Armed forces have no business in unjust wars, like any war waged among imperialists, outside the borders. That is why we demand that any direct or indirect involvement of any military force or equipment in the imperialist war in Ukraine or elsewhere, under any means and pretexts, should stop immediately. The duty of all the Greek people, the armed forces officers, and the conscripts is to defend the borders, the territorial integrity of our country, and our sovereign rights because only in that case the peoples’ struggle is just! The concession of bases and other infrastructure to the imperialists, the involvement in imperialist plans, the participation of the country in imperialist alliances of either the West or the East is unacceptable and dangerous. It is a lie that in this way the interests of our people and homeland can be better served. On the contrary! We believe that the people’s experience, especially today, reinforces the KKE’s position so that the people strengthen their struggle for disengagement from NATO and the EU, for the closure of bases. We also believe that our people need to think, discuss, reflect, and decide what kind of governance is needed today so that their children and themselves live a life free from unemployment, poverty, and wars. And anyone can understand that this is a governance where the people hold the power”, he stressed among other things.

On Friday 01/04/22 the KKE will hold a mass political rally outside the Greek Parliament. 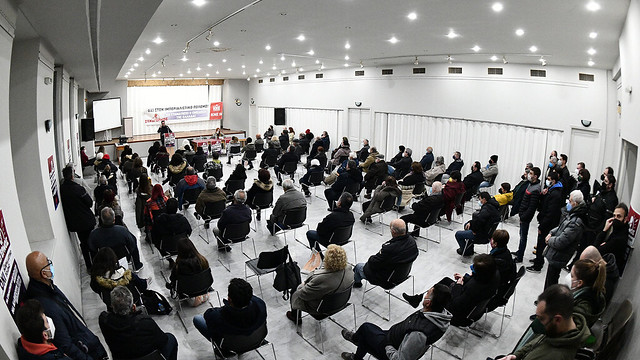