The workers sent a loud message to the government by massively participating in the rally organized by trade unions in Thessaloniki on Saturday 12/09/20. In their speeches, the workers' representatives stressed the need for decisive strengthening of the trade unions and the collective organized struggle against the intensifying anti-labor attack of the government and the capital, so that the people do not pay for the new economic crisis again.

The demonstration was attended by the GS of the CC of the KKE, Dimitris Koutsoumbas, who made the following statement to the media:

"The working class and the Greek people cannot trust the ND government or the other political parties, which instead of repealing the memorandum measures that they all voted together, on the contrary, add new ones with Legislative Acts and fast-track procedures in the parliament that further reduce the people's income, crush labor relations, and abolish the long-established rights of all workers, in all sectors. And all this sometimes under the pretext of the pandemic, and sometimes under the pretext of the economic crisis.

Today Greece has rich productive, technological, and scientific potential, it mostly has experienced scientific manpower and labor force that can work miracles if the wealth of Greece becomes social ownership integrated in a central scientific planning of the economy and of services, free from imperialist agreements and shackles, with the people truly being in power in the country.

This is the call we make today, we call on the Greek people to struggle on this path. To strengthen the workers' and class-oriented movement, the PAME, the social alliance of all popular forces, in an anti-capitalist and anti-monopoly direction, rallying around the KKE ". 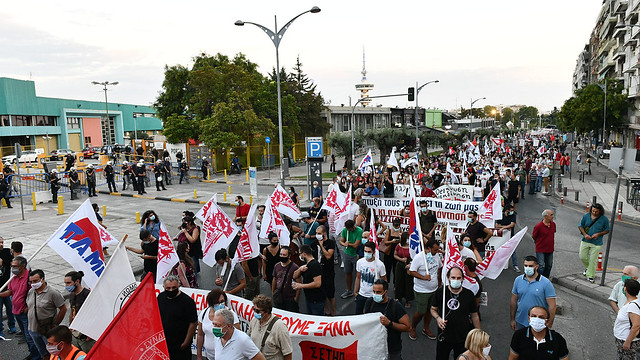