Monument of the KKE in the former concentration camp of Makronisos A very emotional event took place on September 6th, 2020 for the unveiling of the monument of the CC of the Communist Party of Greece on the barren island of Makronisos, which served as a concentration and extermination camp for dozens of communists and other militants by the bourgeois state during 1947-1955.

The monument of the CC of the KKE named “Shadows”, crafted by Markos Georgilakis, a sculptor and associate professor of the School of Fine Arts, stands proudly in a land strewn with the imprints of the imprisoned militants of Makronisos. Five human figures, a woman and four men, emerge from the soils of Makronisos, stand proudly on them, spread their shadow and presence in the field, and compose the monument - tribute to the thousands of militants who martyred in this place.

In this way, a significant duty was fulfilled towards all the prisoners, the dead, those who were tortured and martyred in this dry place, but stood as symbols of courage and strength, morality and heroism, stemming from the unwavering belief in higher ideals, in the ideals of the abolition of exploitation of man by man.

The event ended with a concert with the works of Thanos Mikroutsikos "Cantata for Makronisos", in poetry by Giannis Ritsos and "Study on the poems of Vladimir Mayakovsky", which were played for the first time in this place of martyrdom.

The speech was made by the General Secretary of the CC of the KKE, Dimitris Koutsoumbas, who initially noted: “Every time we step on this rock we feel duty, honor and responsibility towards those who martyred on Makronisos,  those who experienced first-hand the scientific, organized violence of the bourgeoisie with one and only purpose: To subordinate them, to make them repent and renounce the KKE and their ideas.

We do not forget that this hell started operating in 1947. It was done in close co-operation with the British and American allies of the ruling class to crush the workers' - people's movement that demanded the justification of its sacrifices for the liberation of Greece from the yoke of the fascist and Nazi occupation”.

The “Stone lions” of Makronisos, the thousands of members and cadres of the Party who fell in the battle but "quiet, like those who have done their duty", who were not bent by the tortures, the executions, or the bitterness from the defeat of the revolutionary movement, due to the insidious strategy of the imperialist allies of the anti-fascist axis, but also the very mistakes of the International and Greek Communist Movement.

The deeper cause of these mistakes was the very strategy of not linking the national liberation anti-fascist struggle with the conquest of workers' - people's power in all countries, a fact which constantly led to more and more ideological and political compromises and retreats, both of the Soviet Union itself, as well as of the Communist Parties and the Resistance movements, to the allies, mainly Britain as far as Greece is concerned, but also the USA.

The weeping of the members of ELAS at the handover of their weapons at Varkiza turned to determination and decisiveness, as the Soviet Union was saved, the path to socialist construction was opened in many other countries, while the capitalist states, feeling the danger of their overthrow, proceeded to some concessions for their peoples.

Our current action, under definitely different circumstances, but facing big dilemmas and the greatest retreat that the communist movement has experienced in its history after the counter-revolutionary overthrows in the countries of socialist construction, fully justify the slogan: "A century of struggle and sacrifice, with the KKE at the forefront ".

The General Secretary of the CC of the KKE noted among other things: “We know that the sirens of submission and compromise are getting louder. But now, in the midst of dense and dangerous developments, we must constantly ask the people: Are you on the side of Greece’s billionaires and monopoly giants, or Greece’s workers, poor professionals, and the youth that lives in insecurity?

We will never forget our comrades exiled at Makronisos that suffered a lot but never bowed. We will not forget you! We honor you every day with our struggle! None of your sacrifices was lost! Because the seed you left is very strong and it is here today ....

Honor and glory to the thousands of militants who gave their lives for the highest ideals that humanity has ever known. Long live the heroic Communist Party of Greece! "_ 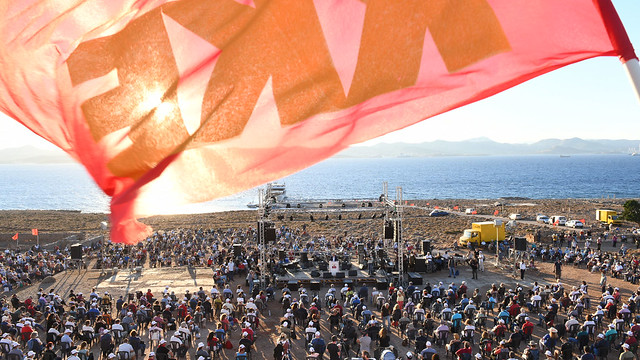