No to imperialist war! Greece’s involvement must stop! Thousands of protesters in Athens, Thessaloniki, and other cities in Greece responded to the call of the Communist Party of Greece (KKE) and the Communist Youth of Greece (KNE) and raised their voices against imperialist war.

In the Greek capital, thousands of protesters flooded the streets outside the Russian Embassy, denouncing the unacceptable Russian military intervention and invasion of Ukraine, which was the formal beginning of a war whose preparation had begun in the previous years and concerns the competition between two imperialist camps —on the one hand the USA–NATO–EU and on the other hand Russia— for the profits of capital, for the share-out of markets and territories. Afterwards, the demonstrators of the KKE and KNE marched to the US Embassy in Athens, condemning the role of US imperialism in the developments.

With their anti-war and anti-imperialist mass demonstrations, the communists of Greece highlighted that the Greek people and the peoples, in general, have an interest in rising up in the struggle against war and not choosing one or the other imperialist camp.

Moreover, they denounced that under the responsibility of all governments of ND, SYRIZA, and PASOK/KINAL, Greece has turned into a vast NATO launching pad for the encirclement of Russia and also into a magnet for retaliation, as Russia has confessed. They demanded that US-NATO military bases should close down, that Greece’s involvement in war should stop, that the country should disengage from imperialist plans and unions, with the people masters in own land.

They also condemned the excessive armaments for NATO needs which are paid by the people as well as the rising prices in fuel, energy, and consumer products, which are strangling the people.

Dimitris Koutsoumbas, GS of the CC of the KKE, attended the mass rally in Athens and made the following statement to the Press: “The choice between one or the other imperialist centre or imperialist alliance, is a choice leading the peoples, the Greek people, to a massacre. Only the independent political strategy against bourgeois and imperialist plans is the way out for the workers and the people. We say no to imperialist war. We demand that Greece should stop right now its involvement in this process, that the bases of death should be immediately closed down.”

In Thessaloniki, the demonstrators marched first towards the Russian and then the US consulate. 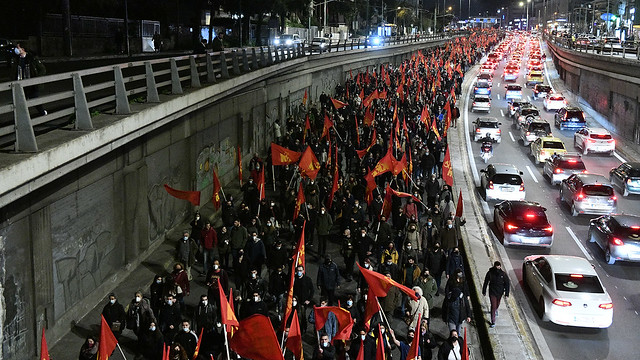