On Saturday 11/09/21 thousands of workers, self-employed, farmers, women, and young people gave a militant and mass response to the government and the employers, participating in the rally organized by PAME in Thessaloniki on the occasion of the Thessaloniki International Fair.

Thousands of demonstrators rejected the government's attempt announced at the 85th Thessaloniki International Fair to disguise the escalating attack on the life and the rights of the working class and the popular strata with a pro-people cloak.

On the other hand, the alleged benefits for the people will not make up for the huge losses of the workers'-people's income, due to the crushed wages and labour relations, the consequences of the pandemic, of the price rise, of the unfair anti-people taxation, and of privatizations. Furthermore, the new anti-popular prerequisites set out by the new EU memorandum of the Recovery Fund will be added to the above, in order for funds to be drawn for green business.

The GS of the CC of the KKE, Dimitris Koutsoumbas, attended the trade unions' rally and made the following statement:

"The ND government generously grants privileges and concessions to the big capital, at the same time that it provides small benefits and mere pittance to the working people; it makes empty promises that fade away under the rising prices, the changes in labour relations, and the loss of rights and achievements that the people had struggled for decades to win.

The mass, class-oriented, and united struggle is a one-way street for the workers in the public and the private sector. This struggle must be waged in every place, every sector, and every region, co-ordinated at a nationwide level. The KKE will be at the forefront of this struggle every day and every hour." 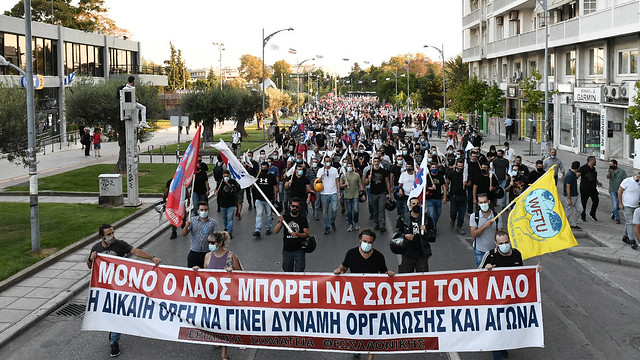