47 years since the Polytechnic uprising

The ban of the ND government failed. The KKE demonstration reached the US Embassy The people do not bow down, they struggle for their health and contemporary rights!

The student uprising at the Polytechnic University in November 1973, with the support of the workers and the people of Athens, which was one of the decisive events that led to the overthrow of the US-led military junta in Greece (1967-1974), was commemorated this year with multifaceted events observing all health protection protocols against the pandemic. The Polytechnic uprising was the result of the long struggle of the KKE and the KNE in conditions of illegality, while thousands of KKE and KNE militants were imprisoned, exiled, and tortured by the barbaric regime of the junta.

Since then, every year on November 17, mass anti-imperialist marches take place all over Greece, culminating at the march ending at the US embassy in Athens. The November 17 rally conveys the messages "USA out - NATO out" and "bread-education-freedom", which were slogans of the Polytechnic uprising, but also express the contemporary struggles of the people against Greece's involvement in US-NATO imperialist plans, as well as the workers' and people's demands for rights to work, education, health, individual and trade union freedoms. The bourgeoisie, its governments and its US-NATO allies find this content of the militant commemoration of the Polytechnic uprising very disturbing.

This year, the ND government, escalating authoritarianism and repression, banned anti-imperialist demonstrations and any gathering of more than three people across the country, on the pretext that the march would be a health 'time bomb' due to the COVID-19 pandemic. The hypocrisy of the government is huge, as it is solely responsible for the daily health 'time bombs' in public transport, workplaces, and schools. Furthermore, it bears co-responsibility with the previous SYRIZA government for the tragic deficiencies in the public health system during a pandemic. 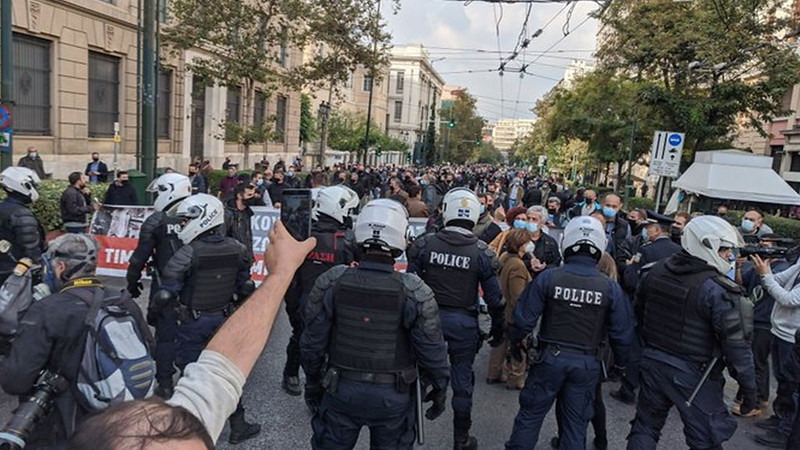 The KKE, the PAME, the workers'-people's movement has already proved on May Day, and in dozens of other cases, that it can adapt militant forms of struggle in pandemic conditions and observe all health protocols set by  scientists, much better than the government does.

The KKE, as well as dozens of unions, student associations and other mass organizations, denounced government authoritarianism and clarified that the militant commemoration will take place, observing all health measures, and that the government's attempt to ban the march will fail. It is of particular importance that even the Union of Judges and Prosecutors issued a statement characterizing the government's decision unconstitutional and calling on it to quash it.

At noon of November 17 in Athens, protesters with KKE banners and flags were able to defy the authoritarian and anti-democratic decision of the government, carrying out a march that reached outside the US embassy, which was surrounded by police buses and strong riot police forces. The GS  of the CC of the KKE, Dimitris Koutsoumbas, was greeted with applause by the protesters and laid a wreath at the place where the police tortured militants during the military dictatorship. In his statement, D. Koutsoumbas noted the following:

"The messages of the Polytechnic uprising are timely. The slogans "USA out", "NATO out", "Bread, education, freedom, work, and health", continue to deeply move the Greek youth and the Greek people, who are struggling today and every day against an ongoing anti-popular policy. It is unacceptable to use the pretext of the pandemic to take reactionary anti-popular measures to ban the commemoration events of the Polytechnic uprising with the symbolic character that they have this year. The decision of the Greek police following the order of the government, to ban any gathering of more than 3 people, especially today, is unacceptable, anti-democratic, unconstitutional, and denounced by the entire political spectrum of the country. Even ND and KINAL supporters -with the latest  having not signed the joint text-denunciation of this criminal, unacceptable and dangerous decision of Mr. Chrysochoidis- denounce this ban. The Greek people, regardless of the insecurity that is cultivated under the responsibility of the government, as it did not take all the necessary measures during these years, are on the side of those who wholeheartedly fight on the path of struggle, in the streets of Athens, in the streets all over Greece. That is why the Polytechnic uprising will live forever".

Asked by a journalist about the KKE demonstration outside the US embassy,  he replied:

"They are simply doing the self-evident. It is a symbolic gesture of young Greek people - as you can see, there is a specific number of attendees - against US imperialism, against what our country has suffered due to US and NATO policy".

The KKE denounces the barbaric unprovoked attack by the police

Later in the afternoon, while the KKE rally remained in the center of Athens in an organized way, observing all health protection measures, the police unleashed an unprovoked attack with batons, tear gas, water cannons and stun grenades. The police did not hesitate to attack KKE MPs, while also injuring protesters and proceeding to dozens of arrests. The GS of the CC of the KKE, Dimitris Koutsoumbas, who was at the head of the rally together with other cadres of the KKE, strongly denounced the barbaric repression and demanded the immediate release of all those arrested. 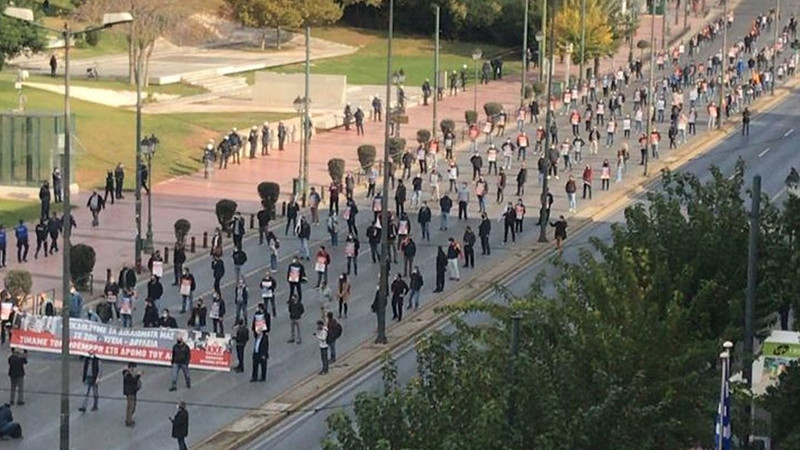