With huge rallies in Athens, Thessaloniki, and a total of 61 Greek cities, following the call of the Sector Federations and trade unions, workers moved forward against the new law of the ND government, which effectively touches up SYRIZA's previous law by further deepening the privatization of Social Security.

The massive strike was in opposition to employer-led and government-led trade unionism, expressed by the leadership of the General Confederation of Trade Unions (GSEE), which actively supports the strategy of big capital, embracing the criteria of competitiveness and the super profits of capital, in accordance with the so-called “resiliency” of the economy.

ND retains the framework of the corresponding SYRIZA law, but makes new anti-labor, anti-social insurance additions in order to safeguard against and to cover up any loopholes that provided justice to tens of thousands of pensioner lawsuits.

Under the new law, the pension is divided into two parts, a national pension and acontributory pension, which will depend on risk and stock market gambling. The employee will pay his insurance contributions, but he will not know the amount of total pension he will ultimately receive. The state will only guarantee the national minimum pension which remains at an abysmally low level.

Themore than 80 billion euros that were stolen from the state pension funds by employers and the state will not be returned.

The huge cuts in pensions in effect since 2010 remain in force.

The retirement age was raised to 67, for both men and women, with the prospect of an increase depending on“life expectancy.”

Workers all over the country demand the same thing:

The class unions, which rally in the All-Worker Militant Front (PAME) and who led the way in organizing the strike, declare that the fight against this new round of attack will continue. The "banner" of this struggle is the right of the working class to work and live based on the contemporarycapacities of production and science, to reap the benefits of the wealth it produces. A struggle linked to the prospect of a different kind of social, economic, and political organization, without capitalists, that will have at its center working people’s contemporary needs for education, work and a life with rights. 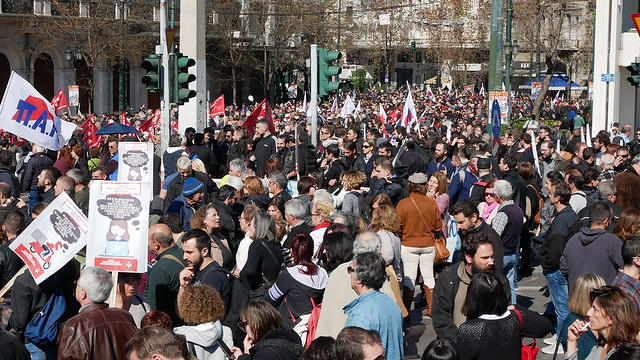 Dimitris Koutsoumpas: The people do not forget, they organize, they win

In his statement to the Press at the strike rally in Athens, the GS of the CC of the KKE, Dimitris Koutsoumpasrelated the following:

"The ND government will pay very dearly for the further demolition of the social security system, as PASOK and SYRIZA paid for it before. The Greek people do not forget, they organize, they win. "