The warships of the imperialists are not wanted! Neither soil nor water to the murderers of the peoples! On the evening of Thursday 24/3/22, thousands of people took part in the mass anti-war rally that shook the port of Piraeus, the major port of the country. The demonstrators chanted slogans, fired off red flares, and sent a militant message that “the warships of the imperialists are not wanted” and “Piraeus is a port of the peoples and not a launching pad of the imperialists”, which were heard as far as the French aircraft carrier “Charles de Gaulle”, part of the NATO armada and berthed at Faliro bay.

The rally was organized by the Labour Centre of Piraeus, the Greek Committee for International Détente and Peace (EEDYE), the Federation of Greek Women (OGE), the Struggle Committee against the Greece–USA Agreement on Military Bases, student associations, and other mass organizations.

Metalworkers, seamen, dock workers, builders, factory workers, young men and women, and women participating in the OGE associations, marched and held banners making clear their decision to escalate the struggle against imperialist war, for the disengagement of the country from the murderous plans of the USA, NATO, the EU, and Russia, clarifying that “the labour movement will not choose a camp between thieves”. KKE MPs Diamanto Manolakou and Maria Komninaka also attended the rally. 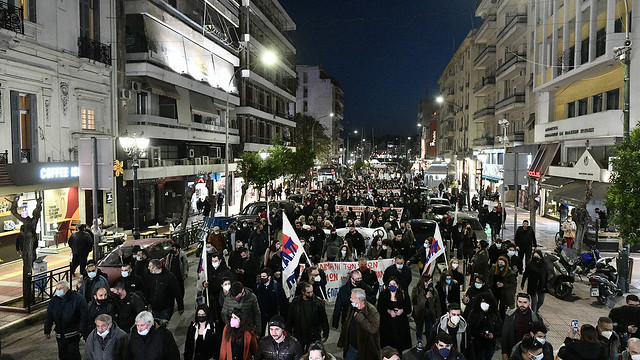