There’s a common enemy both in Greece and Turkey: NATO, governments, and capitalism. Socialism is the future!

The 30th anti-imperialist two-day camp of the Communist Youth of Greece (KNE) took place in Mitilini between 11 and 13 July 2021 and was attended by thousands of young people from all over the country, observing all necessary safety protocols to address the pandemic. From the heart of the Aegean, where imperialist conflicts meet and the refugees’ dramatic situation is unfolding, thousands of campers send a message against imperialist US–NATO–EU plans that massacre the peoples.

Young men and women from all over Greece took a rest with songs, theatrical plays, sport competitions, and cultural events. They stood up against the nationalism and the cosmopolitanism of the capital, the communicating vessels to promote capitalist interests, sending a message of internationalism, of joint action and coordination with the Turkish people.

D. Koutsoumbas denounced the participation of the Greek and Turkish bourgeois classes in the imperialist plans of NATO–USA–EU, to the detriment of other peoples and, among other things, he stressed that “The relations of competition and cooperation that characterize the relations of the bourgeois classes of Greece and Turkey are being developed within this framework. According to the phase that they are undergoing, they disguise their policy either as nationalism or as cosmopolitanism.

The workers in our countries are in danger, both by the sharpening of military conflicts and war adventurism that turn the people and the youth into cannon fodders, as well as their so-called imperialist peace, which prepares the new round of their wars, through the looting of the peoples’ resources and the destruction of the environment by the monopolies brought about by the notorious co-exploitation.

However, we are convinced that the two peoples can chart a different path of development! They can break this vicious circle of the capitalist way of life – as long as they believe in their power and aim at their real enemy! We will also contribute to this cause! Side by side with our comrades from the Communist Party of Turkey! Because our true enemies are not our neighbouring peoples! It is capitalism, the monopolies, and their imperialist alliances, such as NATO.

-Against any case of hot incident and war involvement.

-Against border violations and the questioning of International Treaties that have defined the borders in the region.

-Against the change of borders and the Treaties that define them.

-Against the huge military expenditure of the two countries, which set the scene for a war conflict.

-Against the competition for the exploitation of the hydrocarbons in the Aegean by the monopolies and the plans for their “co-exploitation” by the exploitative bourgeois classes of both countries and their powerful allies.

-Against the involvement of Greece and Turkey in imperialist plans, for the return of military forces from NATO and other imperialist missions abroad.

-For the disentanglement of our countries from the imperialist unions, to expel the US and NATO bases from our countries.

The communists in Turkey and Greece walk side by side in the path of proletarian internationalism. We are struggling together to let the message be heard everywhere: Our neighbouring peoples want and demand to live in peace, cooperation, and friendship, with equal, mutually beneficial relations. We struggle to create the preconditions to eventually overturn the rotten system of exploitation and wretchedness, that is, capitalism, in our countries. All the peoples of the world together can build the new society, socialism–communism!”.

The GS of the CC of the CP of Turkey, Kemal Okuyan, noted that “it is the communists of Greece and Turkey who come together and draw strength from each other. And we will surely win!”. Kemal Okuyan’s full speech (in English) can be found here https://www.tkp.org.tr/en/international/the-speech-of-kemal-okuyan-general-secretary-of-the-communist-party-of-turkey/ .

The Secretary of the Central Council of KNE, Nikos Ambatielos, presented in detail the political developments in Greece and the region, as well as the problems that the youth face. He stressed that hope lies in the peoples’ struggle, that socialism is the future! Nikos Ambatielos’ full speech (in English) can be found here  http://inter.kke.gr/en/articles/Speech-of-Nikos-Ambatielos-Secretary-of-the-CC-of-KNE-member-of-the-CC-of-the-KKE-at-the-30thTwo-Day-Anti-imperialist-Camp/ . A special moment in the central political event

Right after extending his greeting at the rally, the GS of the CC of the CP of Turkey, Kemal Okuyan, awarded the GS of the CC of the KKE, Dimitris Koutsoumbas, with the  “Mustafa Suphi Friendship Award”. The award was named after Mustafa Suphi, the Turkish revolutionary and founder of the Communist Party of Turkey who was murdered along with his 14 comrades by the bourgeois state in 1921. On the event of the 100th anniversary of the foundation of the CP of Turkey, its Central Committee took the decision to award a close comrade each year, to commemorate the founders of the CP of Turkey as well as the friends of the Party who have contributed in its struggle. The 1st award, of 2020, was decided to be given to Dimitris Koutsoumbas, GS of the CC of the KKE, for the close political collaboration and the decades long deep friendship between the two parties. The original award could only be presented now in person, due to the pandemic.

Kemal Okuyan also gifted to the GS of the CC of the KKE the portrait of Nikos Zachariadis, made by the communist artist İrfan Ertel. The portrait was part of the exhibition dedicated to the 100th anniversary of the CP of Turkey, composed by portraits of a hundred of people who had an influence in the history of the Party and the working class movement in Turkey. The exhibition was presented at the Nâzım Hikmet Cultural Centre in September 2020 on the 100th anniversary of the CP of Turkey. 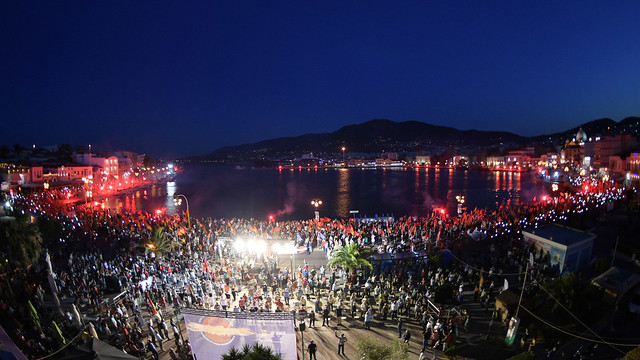