Thousands of people demanded: For the Greek-US Agreement to be cancelled, no participation in the imperialist war On Thursday, 12 May, the ND government voted in Parliament for the new despicable Greece-US agreement that provides for the expansion of the US-NATO military bases in Greece.

At the same time, thousands of people in Athens, responding to the call of the Struggle Committee against the Greek-US Agreement on Military Bases, together with Trade Unions and mass organizations, held one of the largest and most militant anti-imperialist rallies of recent times. They demanded for the Greek-US Agreement to be cancelled - no participation in the imperialist war. Rallies were held in dozens of cities throughout Greece as well.

A large delegation of the CC of the KKE headed by its GC, Dimitris Koutsoumbas, attended the rally.

Dimitris Koutsoumbas,in his speech the same day in the Plenum of the Parliament, highlighted that the Greece-US Agreement on Military Basesis historically dangerous for the people, historically detrimental to the country's sovereign rights, and the responsibilities are historic for everyone that will vote in favour, but also for those who prepared it within the framework of the strategic dialogue with the USA inaugurated by SYRIZA and ending with the monstrosity agreement that the Prime Minister wants to bring to the meeting with the US president.

Commenting on the shielding of the country from Turkish aggression, he noted that “not even your supporters believe you”, and added that this is a historically completely bankrupt argument used by all governments to justify participation in NATO plans. He also noted that the country is anchored increasingly in NATObased on the interests of specific sections of the Greek bourgeoisie.

Dimitris Koutsoumbas underlined thatthe banner that the KKE hung on the Acropolisreading “No to war, no involvement, no to the bases of death” honoured the militancy of our people. 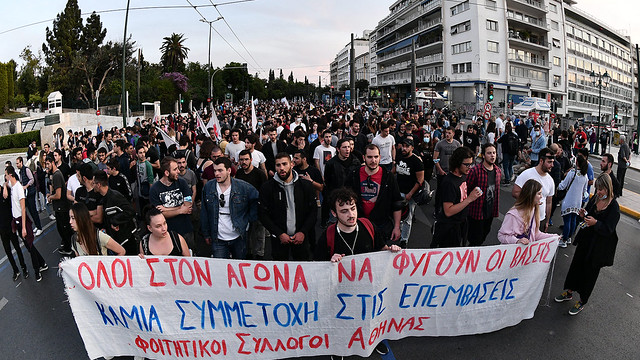