Thousands of people demonstrated outside the US embassy The KKE and KNE commemorated the 49th anniversary of the Polytechnic uprising of students and workers in Athens against the fascist junta, which was supported by the USA and NATO. The mass and militant march ended at the US embassy, with slogans that conveyed to the people the call to write a new page in history, to take the baton of struggle for the timely and unfulfilled demands for “Bread–Education–Freedom”.

On 17/11/22, people of all ages, thousands of workers and young people, parents with young children, and workers that fought great battles at their workplace and are preparing for the next ones, participated in the contingents of the sectoral and area-based organizations of the KKE and KNE. They formed a vast red sea that sent the strong and clear message that the character of the Polytechnic uprising is relevant 49 years later; it is to be found in the people’s struggle for their rights, against imperialist plans and wars, for the overthrow of the system of poverty and exploitation.

The banner of the Party Organization of Attica, which was at the head of the march, read “On the path of the unyielding struggle, with the people at the forefront. That is how our just cause is won! That is how history is written!”, setting the tone for the demonstration. “The people do not forget, they honour the militants” was the slogan shouted by the KKE and KNE members to honour the militants of the Polytechnic uprising and the struggle against the dictatorship, continuing the ideological–political struggle against the dictatorship of capital, against the system that brings the people face to face with energy poverty, the harsh reality of deteriorating living conditions, and the inhuman face of imperialist war.

“Profits for the few, poverty for the many, that is the power of the capitalists”, the demonstrators denounced. In the face of today’s barbarity, they sent a message of militant optimism that “Our future is not capitalism, it is the new world, socialism”.

At a time when the war continues raging on the territory of Ukraine and the competition of the imperialists may lead to an escalation and generalization of the military conflict, the demonstration focused on the demand for Greece’s disengagement from imperialist plans. “NATO, the USA, and their bases out of Greece”, “No land, no water for the murderers of the peoples”, “NATO and Russia are redividing the world, they draw the borders with the peoples’ blood”, “NATO out of Greece, the bases must be closed down, no involvement in military interventions”, “In Greece and Turkey the enemy is the same; NATO, the governments, capitalism”, were some of the slogans read on the banners and shouted by the KKE and KNE organizations.

Thousands of protesters chanted the slogan “Conscripts are the people’s children, they must not be sent outside the borders”, which was also written in the banner of the young conscripts, who demonstrated despite the ban imposed on them, receiving warm applause for their stance.

“We honour November following the path of struggle for studies and life with contemporary rights”. This slogan written on the banner of the Athens University Student Associations demonstrated that the timely messages of the uprising find expression in the students’ demands, that the lessons drawn from the struggles of the past illuminate the path for the struggles of today.

The demonstration was also attended by trade unions and the Greek Committee for International Detente and Peace (EEDYE). Dozens of anti-imperialist demonstrations took place throughout the country, while in Thessaloniki the demonstration marched outside the US consulate.

The messages of Polytechnic uprising are still relevant and timely

The march was attended by a large delegation of the CC of the KKE, led by its General Secretary, Dimitris Koutsoumbas, who made the following statement: “The commemoration events and marches that take place 49 years later show that the messages of the Polytechnic uprising, such as ‘The USA, NATO, and the bases of death out of Greece’, the messages for the protection of the people's income, against poverty and unemployment, for public and free education and health care, against state repression, fascism, phone tapping and monitoring, i.e. the dictatorship of capital, are still relevant and timely to this day.” 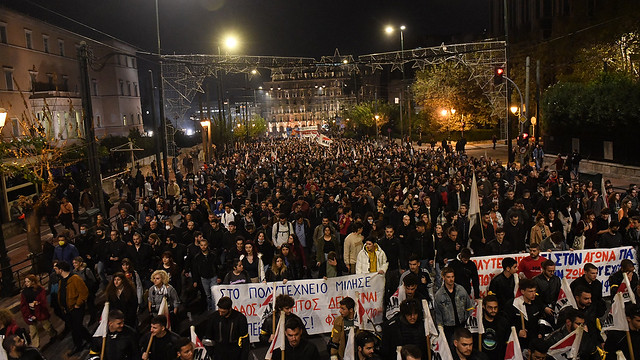