USA - Israel murder people. Solidarity with the people of Palestine On 14th May workers, young people and women demonstrated at the Embassy of Israel, in a protest organized by the Greek Committee for International Detente and Peace (EEDYE). All Workers’ Militant Front (PAME), the Federation of Greek Women (OGE), the Greek Committee for International Democratic Solidarity (EEDDA) and trade unions also called to the demonstration. The demonstrators expressed their opposition to the recognition of Jerusalem as the capital of Israel by the USA and their condemnation of the Palestinians' new massacre by the Israeli army.

The mobilization was also attended by the GS of the CC of the KKE, Dimitris Koutsoumpas, who made the following statement:

"We vehemently denounce today’s new murderous attack by the terrorist state of Israel against the Palestinian people, which has already resulted in dozens of dead and thousands of heavily injured, amongst them women and children, hundreds of children, from this murder machine called Israel.

At the same time, today we express our full sympathy for the entire Palestinian people, who legitimately and fairly claim the right to have their own homeland, their own state, independent, sovereign, next to Israel, at the borders of 1967, having East Jerusalem as the capital.

The despicable recent illegal decision of Trump, which is being implemented today, to transfer the Embassy from Tel Aviv to Jerusalem, which, in practice, i.e. de facto, consolidates Jerusalem as the capital of Israel, together with the US withdrawal from the agreement for the nuclear program of Iran, which has been signed by many other countries, as well as the continuing US interventions and bombings against the people of Syria, all these poison the people, they constitute a further escalation of the imperialist war, they make the danger of the  generalization of this imperialist war across the wider region more direct. And we know that here is our neighborhood and when the neighbor's house catches fire, it will quickly reach our house, too.

That's why vigilance, struggle, every day on the streets is needed in order to prevent these policies that lead our people to massacre. " 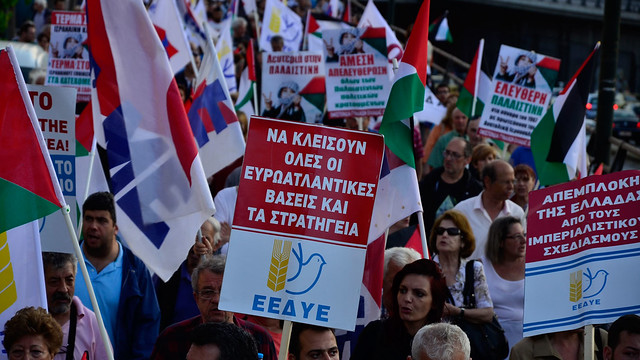