Thousands of university students across the country, along with teachers, parents and students, sent a strong message against the government's anti-educational policy on Thursday, 28/01/2021.

It should be noted that on the eve of the mobilizations, the ND government, under the pretext of tackling the pandemic, banned gatherings of more than 99 people throughout the country. At the same time, the government, taking advantage of the governing majority in the parliament, has passed a new anti-democratic law, according to which, in order for such a rally to be allowed it must previously be declared on a special online police platform, along with the organizers' tax information. Thus, it is obvious that the government intends to suppress rallies and demonstrations against its policies, as well as to financially exterminate any organizer, as the latter will be called to bear  responsibility for the actions of various provocative groups. The KKE has voted against and denounced these anti-democratic methods of the ND government.

On January 28, the mass participation of thousands of young people in the demonstrations abolished in practice both the new anti-democratic law on rallies as well as the anti-democratic decision of the government to ban rallies of more than 99 people.

The thousands of university students and pupils mobilized against the government's new Education Bill, introduced by N. Kerameos, the Minister of Education, and M. Chrysochoidis, the Minister of Citizen Protection. The bill provides for new class barriers for access to higher education, 30 million euros for the establishment of a separate police force for policing in universities, while it also proceeds with the deportation of those students who are late in completing their studies. This is taking place in conditions of a new capitalist crisis, when Greece has not developed a system for halls of residences and other students' services, with the result that children from working and popular families are forced to work in order to survive and study, often at the expense of the timely completion of their studies.

Students demonstrated in Athens, Thessaloniki and in many other cities in Greece against all the above provisions by the government bill, demanding at the same time the opening of universities, which remain closed for the second year in a row, with all the necessary measures for the protection of public health against the pandemic. 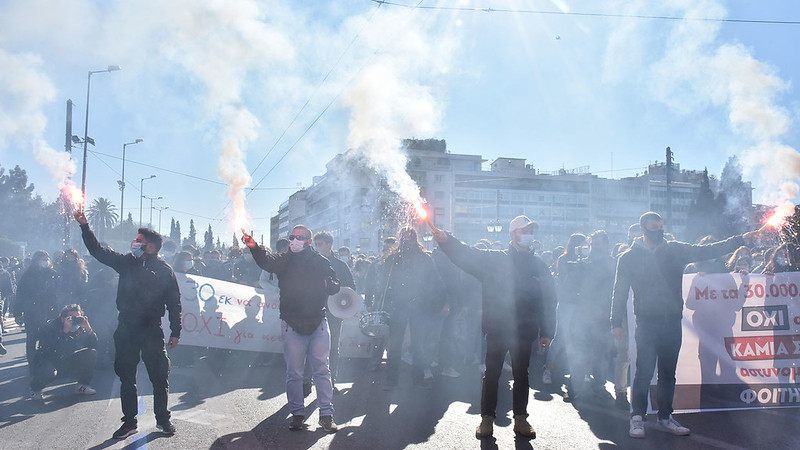 In a statement on the rallies, Dimitris Koutsoumbas, the GS of the CC of the KKE, noted:

“University students, academics, secondary education teachers, pupils and parents today canceled in practice the pretextual bans. Just as they will cancel  the despicable bill that puts new obstacles in studies, intensifies repression inside and outside the universities. The government must withdraw the Kerameos - Chrysochoidis bill and open universities with all the necessary measures. It must stop causing distress to thousands of students and their families. Instead of changing for the worse the access to the universities, it must take measures for the safe opening of schools”.