A loud, dynamic message  that the youth is not silenced, that under unprecedented conditions,  it can take a stand and fight for its contemporary rights was sent by The 29th Anti-Imperialist Weekend of the KNE that took place 18-19 July in the Stomio area of Larissa.

Throughout the camping weekend and the events that were held, the exemplary organization of the Anti-imperialist Weekend was demonstrated. The KNE organizations had taken all the necessary health measures based on scientists’ recommendations, ahead of time, in order to hold the two-day event safely under the unprecedented conditions of the pandemic. For this reason, a specially-equipped and staffed  medical center was set up at the campsite, where campers had their temperatures taken continuously and measures were taken to maintain the necessary distancing during all of the weekend, etc.

The highlight of the weekend was the political gathering with speaker Dimitris Koutsoumpas, General Secretary of the CC of the KKE, who among other things,  highlighted the following:

“This year’s Anti-imperialist Weekend takes place at a time when the people and the youth of our country are undergoing new, extremely difficult trials, proof that capitalism is a system that cannot be ‘cured’.

The contradictions created by this system are incurable. The thousands of people who took to the streets in the United States and in other countries of the world prove that popular outbursts of rage are ahead of us. Nothing remains static forever. What seems unshakeable today will be shaken tomorrow by the titanic struggle of the people. Our action today can create cracks in the rotten exploitative system, preparing the working class for the great and decisive confrontation.

The days when the victims of exploitation will break their chains are coming. The victorious outcome of this battle is judged today, in the tough daily struggle. We tirelessly continue this effort, to become an “all-weather” Party. The KNE to play its leading role at the side of the KKE.

From here in Stomio, where the principles of collectivity, of conscious discipline, of determination and creative militancy of the thousands of KNE members who gave their all for the success of this two-day event, shine once again; we say it clearly: We will succeed!”

On Saturday 18/7 a section of the campers suddenly mobilized outside the Greek Air force Base in Larissa, where the drones of the American Air Force operate in the wider region of the Eastern Mediterranean. In this way, but also with other events during the Two-Day event, the KNE demonstrated its opposition to the transformation of Greece into a base for the assassins of NATO and the USA, in favor of disengagement of the country from imperialist designs and organizations.

An event entitled “The struggle of the youth against the war cries and the alliances of the capitalists in the Eastern Mediterranean” was also held during the two-day event, at which Elisaios Vagenas, member of the CC of the KKE and Head of the International Section of the CC of the KKE spoke, while messages were read from EDON and the Communist Youth of Turkey. A seminar was held for university students, with Loukas Anastasopoulos as speaker, member of the Ideological Committee of the CC of the KKE, on the topic: “On the occasion of the 150th anniversary of Lenin’s birth, we discuss: Confidence in the bourgeois state or in the power of the people?”

Numerous cultural events, musical tributes, concerts, sports tournaments, etc, were also held at the camp. The small friends of the KNE had their own special presence once again in the children’s camp with a corresponding program of cultural and sports activities, games and more. 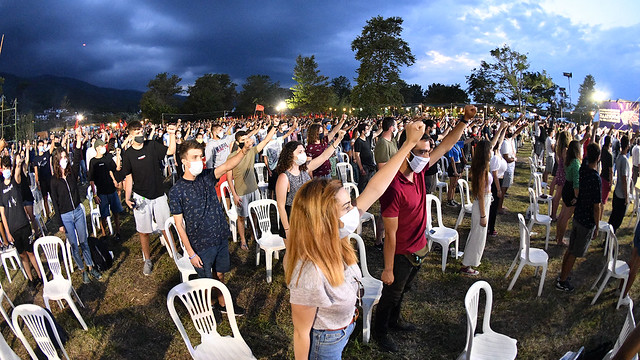